On Sunday, 8th May, Civitas organised their annual tribute to St. Joan of Arc.  More than two thousand people gathered together in central Paris.

From 12:30pm onwards in the Place Saint Augustin, a large number of diverse shows and speeches followed one after another. This annual commemoration always has a fundamental family dimension to it; young and old, big and small were all able to observe demonstrations of fire-breathing followed by a juggler like no other in the person of a very talented Benedictine brother. Whilst Girl Guides offered something to eat, the audience enjoyed a mini-concert by the singer Epona. The Choir Montjoie Saint Denis was also present. Marion Sigaut, Roger Holeindre, Carl Lang, Thibaut de Chassey, Pierre Sidos, Mary Herbais, Jany Le Pen, Roland Helie and Damien Viguier all took to the podium in turn to encourage participants to resist the evils besetting France. Then Dom Cyprian, Prior of the Benedictine Monastery of Our Lady of Guadalupe who was visiting France from the USA, conducted the blessing of the banners.

The crowd then turned and marched on, with the parade headed by three horsemen in armour including a girl symbolizing Joan of Arc, clutching a replica of the majestic banner with which the saint came to Orleans on 8th May, 1429.

Alternating between the Litany of Saint Joan of Arc, and songs and slogans, the procession reached the site of the Pyramids where, after a wreath laying ceremony at the feet of the statue of Joan of Arc, the Montjoie Choir sang the Prayer of the Paras, and the concluding three speeches were given by Pierre Hillard, Alain Escada and Father Xavier Beauvais, in order to remember the true mission of St. Joan of Arc and how we must try to be worthy heirs for the restoration of France and of all Christendom. 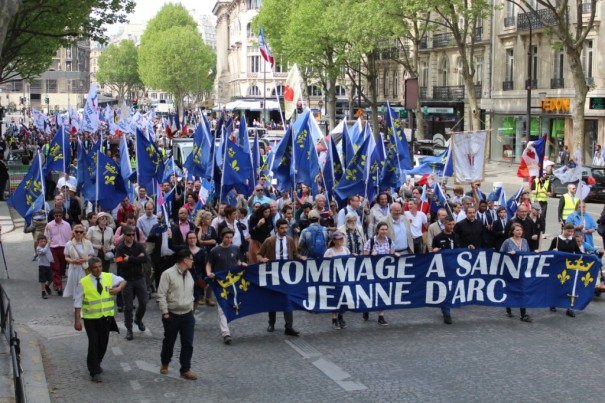