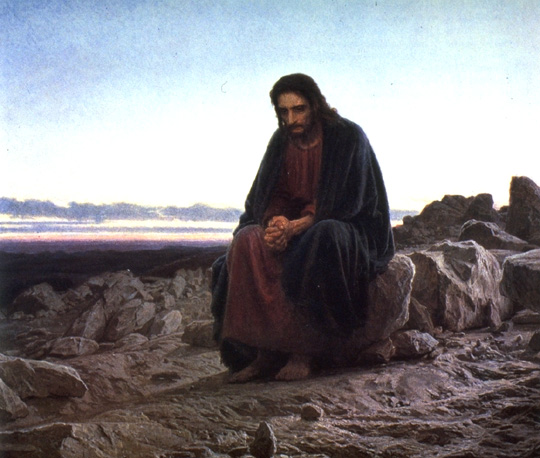 THIRD WEEK OF LENT: THURSDAY
Jesus insulted at the Court of Herod

1st Prelude. Let us picture to ourselves Jesus reviled and insulted, and treated as a fool at Herod’s court.

2nd Prelude. Beg for grace to understand the indignities which Jesus bore for love of us.

POINT I. “And when he understood that He was of Herod’s jurisdiction, he sent Him away to Herod, who was also himself at Jerusalem; and Herod, seeing Jesus, was very glad for he hoped to see some miracle wrought by Him.”

CONSIDERATION. Herod was a vain and degraded man; he had put St. John Baptist to death; and he wanted the Saviour of the world, of whom he had heard so much, to work a miracle before him, not that he might be touched and converted, but simply to gratify his vanity and curiosity. But God does not grant extraordinary graces to such men as these. He reserves them for the humble, who deem themselves unworthy of them. He delights to pour them on those who are emptied of self, dead to self-love, seeking only His greater glory. These souls ask for extraordinary graces or miracles only that they may serve Him better, or gain others to His service.

APPLICATION. The reason why we receive so few extraordinary graces is that we either lack these dispositions altogether, or have made little progress in them; and after having perhaps passed many years in our holy vocation, we are very unlike those who, powerful in word and work, had the same vocation, and of whom wonderful things are recorded.

POINT II. “And he questioned Him in many words; but He answered him nothing. And the chief priests and scribes stood by, earnestly accusing Him.”

CONSIDERATION. Wonderful indeed was the silence and passiveness of our Divine Lord before the tribunal of Herod, to which His cause was referred. He was accused of greater crimes still, but His accusers so outwitted themselves, that He could in a few words have confounded them, and turned the tide in His favour. Yet He held His peace. He went there to receive a sentence for life or death, and if He had chosen to work a miracle at Herod’s desire, He would have found protection; but He would work none. It is in reality a greater miracle to triumph thus completely over every human feeling than to raise the dead; but the world cannot understand this. The calm silence of our Lord was looked upon by Herod and his court as helplessness and stupidity, and they treated it as such.

APPLICATION. Our Lord kept silence to punish Herod’s pride and to teach us to mortify ours. Our pride is our greatest trial; in spite of ourselves it makes us desire esteem, notice, praise, and applause from men, especially from the great ones of the Earth. Have we fought steadfastly and victoriously against this unruly passion of pride?

POINT III. “And Herod with his army set Him at naught, and mocked Him, putting on Him a white garment, and sent Him back to Pilate.”

CONSIDERATION. Let us contemplate Jesus, the King of glory, the eternal Wisdom, standing before Herod, insulted by the coarse and stupid mob; let us follow Him in spirit, wearing the fool’s robe, through the streets of Jerusalem, amidst the jeerings of the populace and the immense crowd of strangers which the Paschal feast had brought into the city, and we shall see that the prophecy of Jeremiah was fulfilled to the very letter: “I am made a derision to all My people.”

APPLICATION. This meditation ought to produce great fruit in us. When we contemplate Jesus Christ as the true way, which leads us unto life, as the living model of perfection, it should kindle in our hearts an ardent desire to become like unto Him, to serve Him willingly, to be ready, in imitation of Him and for His love, to be despised, insulted, reviled, and even looked upon as a fool, although we have done nothing to deserve this treatment: this is the foolishness of the Cross. Many of God’s servants have travelled by this road; why should not we follow in their footsteps?

COLLOQUY with our Blessed Lady.