More news has emerged regarding the operation conducted by the anti-Christian government of Spain in its desecration of the grave of former Head of State General Franco.

The Benedictines of the Abbey of the Holy Cross have affirmed that permission for the exhumation of Franco’s remains had not been granted by them and that armed police from the Civil Guard invaded the private property of the monastery, including the basilica.

“We want it to be on record that the actions of the security forces and the workers have been and are totally incompatible with the principle of the inviolability of places of worship and the rights of this Benedictine community.”

Furthermore the monks were denied access to their own basilica, where the Blessed Sacrament is housed, by armed goons belonging to the Civil Guard.

“……. the Civil Guard, without judicial authorisation to allow it, accessed and wandered about the premises of the abbey and, what is more serious, accessed and wandered about the basilica…….. without any ecclesiastical authorisation and occupying it 24 hours a day…….. chains and padlocks were placed on the access door between the abbey and the basilica,” despite the fact that the monks are “the sole owners and custodians of the church.”

The Benedictines went on to add that because the abbey and basilica were forcefully taken over by a hostile party “without the least supervision” the sacred character of the church was violated and the religious guardians of the basilica are left “not knowing if actions incompatible with worship, piety, or religion have taken place.”

The desecration of Franco’s grave reminds very much of the vile attacks on Christianity in the years and months leading up to the Spanish Civil War, which also involved the desecration of graves. 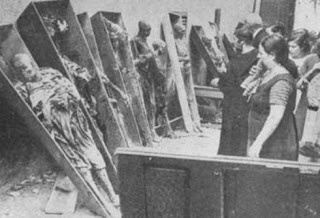