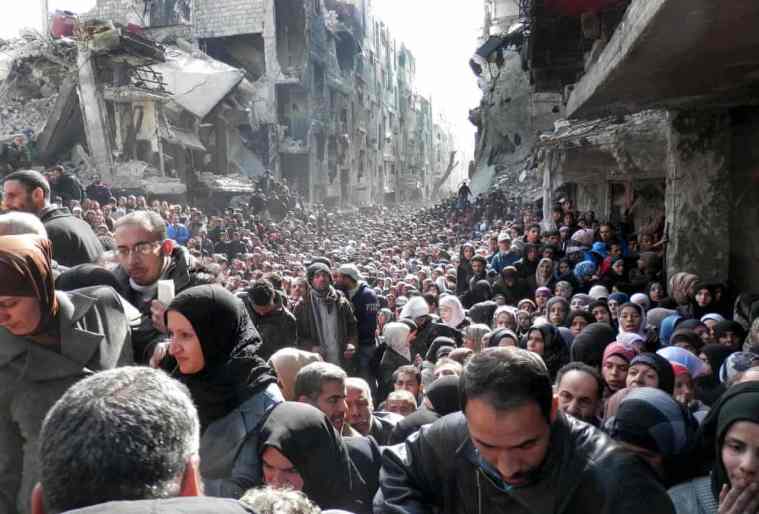 When I arrived in Damascus in 2006 I hardly ever met anyone asking for aid. Querying this fact I was helped by a fellow priest who told me that this was normal in a country where education and hospital facilities are free:  low salaries were enough for everyday needs.  There was no need to beg.

Eight years of war have destroyed an entire country and its peaceful people: unmerited destruction, 600,000 deaths, 12 million refugees and homeless exiles, a paralyzed economy, worthless money, and. ever-rising inflation, all with a crushing embargo. .

Families are saying now: we were better off with bombs flying around us. We could take shelter and hide somewhere. .How can we get away now with an economic war knocking at the door?

The economic struggle is fast taking the place of the violent military interventions and touches all social classes; the embargo on anything from Iran has engulfed the Syrian people who are seemingly forgotten and left in misery. .

If it was hard to meet a poor Syrian in 2006, today it is impossible not to come across a Syrian who is not living in need whilst facing impossible social problems, all crowned by  a constant lack of work, and therefore continual unemployment.

How difficult it is to see those families torn apart more and more, and obliged to continually beg to stay alive. However, the hardest is not that of seeing people in need but how their human dignity is so wounded.  Bitterness can be seen so easily in the faces which do not look one in the eye in order to avoid further humiliation.

In the face of this hurt and broken people the Church keeps looking at the EMPTY TOMB.