“If you ask me to infiltrate some drug dealers you can’t point the finger at me if I sample the product.” This was the response of a degenerate scumbag of a cop at the Undercover Policing Inquiry when asked what his views were on undercover police deceiving women into having sexual relationships, entering into sham marriages and even having children who they later walked away from, This is the sick mentality of the political police who tried to encourage left-wingers to burn down a Catholic charity shop with the likely result of murdering people in adjoining student accommodation.

Heads must roll, starting with the criminal prosecution of Carlo Soracchi, pictured, the Special Branch cop who wanted the Catholic charity shop firebombed.

Pressure must be put on public authorities to bring criminal prosecutions against police agent provocateurs who tried to encourage people to engage in criminal conspiracies, including the burning down of a Catholic charity shop which could have resulted in the murder of people living in adjoining flats.

The Undercover Policing Inquiry heard that officer Carlo Soracchi, who worked undercover using the alias ‘Carlo Neri’, tried to persuade people to firebomb a Catholic charity shop. Justice demands that he must be arrested and prosecuted for this and any other criminal activity that witnesses might testify he engaged in. 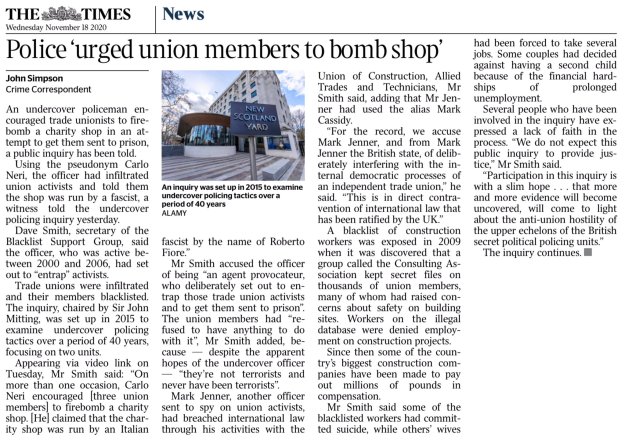